Why You Should Store Food NOW.

I’ve had people ask me why they should store food now rather than waiting to see if a crisis event takes place.    Many would rather have their money earning interest in a bank so that if the s-ever does hit the fan, they have the finances to deal with their new normal.  Having a stash of cash is important in an emergency situation.  However, I believe that the time to get your tangibles is before the crisis, not after.  There really are times when food is more valuable than money. 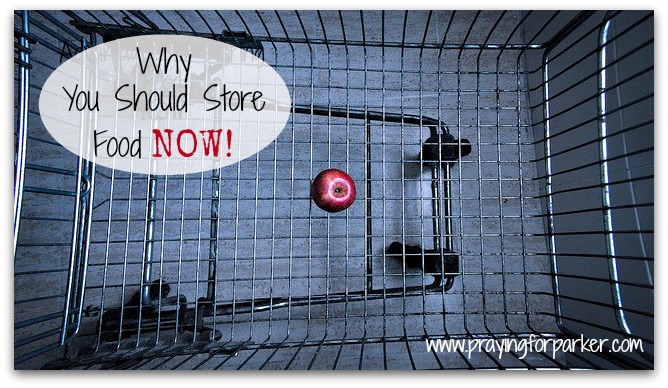 How do I come to this conclusion?

* You can’t eat money.  In times of crisis, store shelves will be wiped out in the blink of an eye.  It won’t matter how much money you have on hand if there’s nothing around to purchase.

* Items from your food storage will be highly valued barter items.  Cash stands a huge chance of being devalued to the point of worthlessness.

* Food prices are only going up.  And up.  And after that, they’ll go up some more.   When you store food now, using a variety of techniques, it’s like money in the bank that is actually earning interest in the form of  being exempt from rising food costs.

Nobody can control the economy.  But we can control how it affects our lives.  Storing food is one way to prepare for what ever uncertainties the future may hold.

Do you store food in case of emergency?

Tammy is a mom to 6 wonderful kids, including Parker, who came with an extra chromosome! She is passionate about special needs advocacy, living within her means, and preparing for an uncertain future. Tammy’s main blog is Praying For Parker. Make sure to visit her there as well!

Top 10 Oils For Prepping
Next Post: How to make goat milk yogurt.